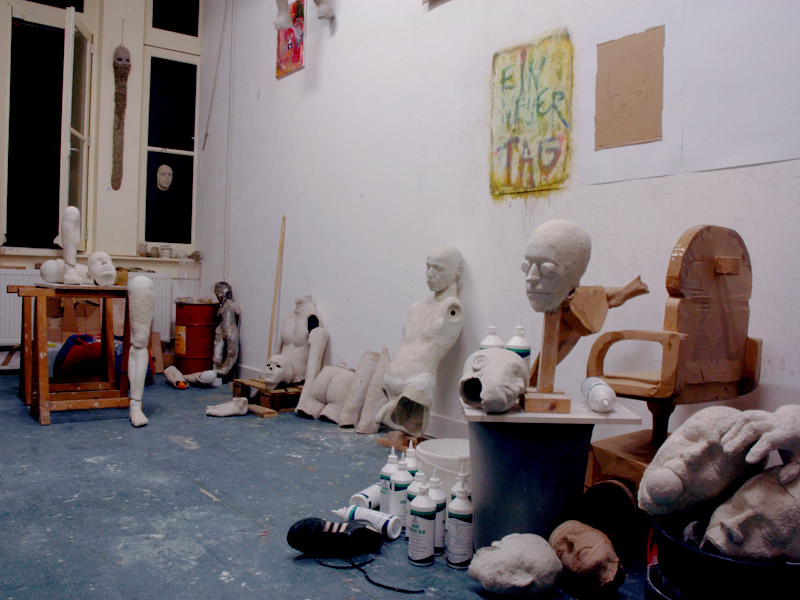 A place where I can be myself. Usually both the place where I live and my studio, two locations where I spend a lot of my time, but also in the company of good friends.

The first thing that comes to mind is being healthy and thus having the ability to (try and) live the life I want to live.

Everybody seeks in some way recognition for their talents I think. I know I do. If ultimately fame is the reward for those talents, it’s all good. However, if one’s in the art world for personal fame, I’d recommend them to consider a career change.

An intrinsic drive to keep going. Hope and curiosity for what lies ahead. Besides, I couldn’t think of something else I’d rather do.

Stumbling through life and picking not only yourself up along the way.

It used to be Bruce Lee, that guy could kick ass! Aw, he still ís my hero.

I’d travel into the future to attend my own funeral and see who showed up. And I’d make sure they played the right music at the ceremony!

For me being an artist comes with sacrifices, both on a personal and professional level. There are no such things as 5-day workweeks or weekends, it’s more like a way of life, rather than a profession, even though that probably sounds trite. Artists are self-centered persons, focussed on their own processes, which demands sacrifices from the people around them, too. I lost things and I encounter new, other things while I’m going, but perhaps that’s not only ‘art’, but just ‘life’.

Perhaps my inability of being without sound or music. There’s always something playing in the background. That, and cigarettes.

I’m more of a dog person, when I was younger I’d been begging my parents for ages to get a dog. In the end we got a black poodle from the animel shelter, Bobbie. I had no authority whatsoever over the dog and he’d get all fired up when you were sitting with him in one car (probably because his previous owners had kicked him out of the car when they abandoned him), but I still have a polaroid of him on my clipboard.