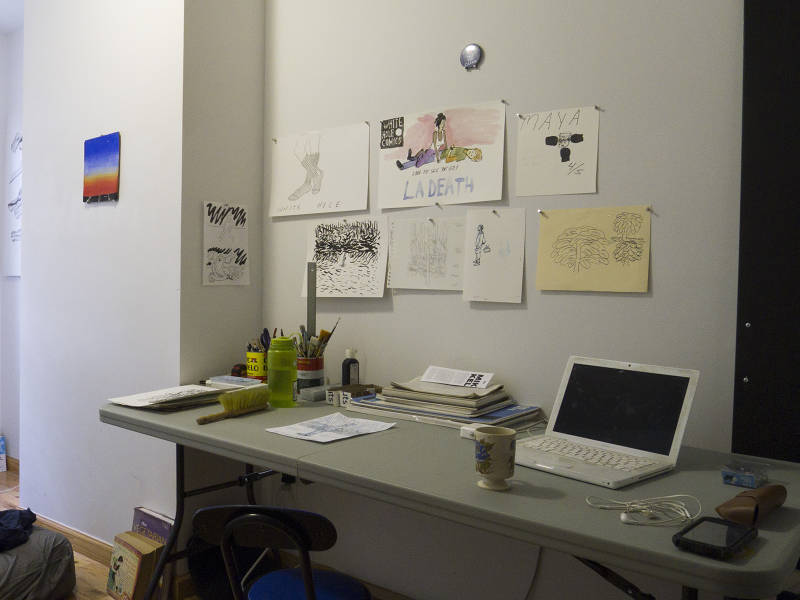 Can you be totally alone in the woods and be at home? Yeah sure. When you’re lost, you just go up the highest mountain, so you can see all around. You get out your map and compass and shoot three bearings at any three spots you can see on the land and on the map. You draw those lines on the map with the side of your compass and where they intersect, that’s where you are. It’s a great feeling, knowing exactly where you are. And It makes the mountains a bit less daunting, but not by much. You can shoot a bearing and start heading due west or wherever, but you’re still gonna have to scramble down rock slides and get over deep creeks. So you can know exactly where you are and exactly where you’re headed, but you still have to climb through scrub oak and along rotten tree trunks. It’s tough, being somewhere and going somewhere. You can triangulate with anything to see where you are. You’re right between something shitty, something cool, and something weird. The good stuff is when you’re right between other good stuff. I can triangulate my family. When I’m home, my mother, father, and brother are around me. My mother’s the birder, my dad’s the astronomer, and my brother’s the flyer. So in that case, Little Rock’s my home, my cardinal center. Little Rock’s the red bird.

What’s golden and hard to find, and when you open it up it glows, and it’s worth so much you need 10 people to share the wealth? An indoor basketball court!

Black 1974 Chevy Nova SS
Fin, you pick our shades. What girls should we pick up? You pick them too.

Andre, Nick, and Pete meet Layet at the coffee shop to discuss the PLAN. They each brought THE STUFF. They meet at QUARTER TO FOUR. They each bring a quarter FOR THE METER. They all have on GOOD JEANS.

It’s not reeeaalllyyy a sacrifice, but I became a vegan recently and I just wanna say that I’m very happy with my decision!

More so Brooklyn Brewery, across the street from Vice, where I want to volunteer one day, you know bottling beers or folding boxes, in exchange for a free case of Brooklyn Lager. Like I did in Athens at Terrapin Beer. And Tim, if you’re reading this, I’d like to do the same at Flyway one day.

One Dog. Softie. I got to hold you when they put you down when I was 17. Love you miss you, Layet.